On Febuary 19th I saw a tweet by @livenationsf about a chance to win tickets for Miley Cyrus' shows in the Bay Area. I admit I watched Hannah Montana when I had a TV. I also love her song "Wrecking Ball." I figured it wouldn't hurt to enter the contest. I entered it once and didn't think about it again.

Fast forward to February 21st, I checked my e-mail and saw there was a message with the subject "Congratulations! Miley Cyrus: Bangerz Tour Sweeptakes. I quickly opened the message and read that I was a potential winner for two tickets valued at $119. I followed the instructions to redeem my prize. I had to reply that I read the rules and with the show date I wanted to attend. My choices were February 24 at Oakland Arena or February 24 at SAP Center in San Jose. I picked SAP Center because it's closer to me and it was on a Tuesday. In about an hour my win was confirmed by a Live Nation representative.

I looked forward to hearing "Wrecking Ball" live. I wish I had more time to listen to her album so I had an idea what to expect. I only had the opportunity to listen to it once.

I asked my mom if she wanted to go to the concert with me. She said yes.

Parking at SAP Center makes my wallet cry. The last time I was there for the New Kids/Boyz II Men/98 Degrees Package tour I paid $20 for parking.I tried to find parking at the train station across the street but all the signs said parking was $25! I thought if it was $25 both outside and inside the venue then I might as well park inside. It amused me when the parking lot wasn't filled up. (Apparently other people have their secret parking places?) 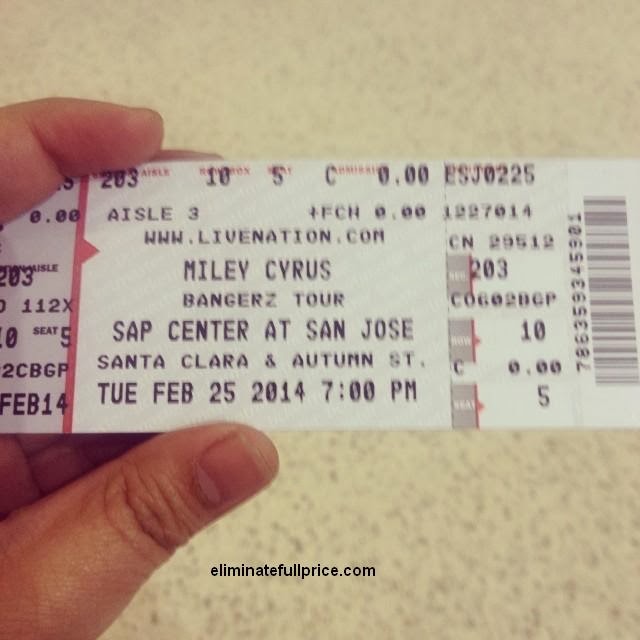 I secretly hoped for lower level seats but I ended up with nosebleeds. It's okay. I can't complain since they were free. I was given section 203 row 10 seats 4 and 5. When I got into the venue I saw that I didn't have to walk far to get to my section. It was near the box office side entrance.
My mom wanted to get food so I bought her a hot dog which she ended up giving to me after one bite lol I also got nachos and soda all for $21.75! O_O I was amused the hot dog was $5.75 because I could get almost 4 hot dogs at Costco for almost the same price lol
My mom and I then go to our seats. Hanging above the floor seats were balloons. There were also balloons along the stairs for the audience to get to their seats. The balloons were arched like M's which I believe were supposed to stand for Miley but they reminded me of the McDonald's arches instead.
The view from the seats was okay. Unfortunately the huge screen behind the stage was obstructed by the lighting equipment. Upon entering section 203 I smelled something funny but more on this later.
The first opening act was Skye Ferreira. She didn't really have stage presence. She actually stopped in the middle of singing one song and said that she was going to sing another song. That felt awkward.
The second opening act was Icona Pop. I loved their energy! They really got the crowd pumped up. It was fun hearing "I Love It" live. The last time I was at SAP Center NKOTB played "I Love It" during their song so it was nice to actually hear it live. 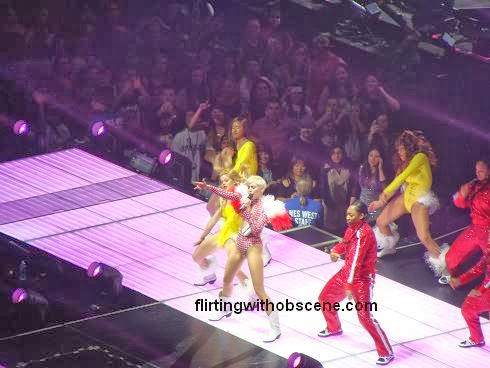 The wait for Miley felt very long but then she finally makes her grand entrance by sliding down a slide in the shape of her tongue. She was dressed in a very flashy outfit. That definitely set the tone for the night. She does her first batch of songs and then does a costume change into a Marijuana printed leotard. She sits on a toy 4x4 for her song by the same name and proceeds to make it rain by throwing money all around the stage.
Speaking of Marijuana there was a group of people in the next section, 204, smoking weed during the show! I couldn't believe they got away with that. I would have snitched on them but my seats weren't in the aisle so it wasn't so easy to maneuver out. I thought it was so lame people were getting high at a Miley concert. I know Miley is pro-weed but still, if getting high at a Miley concert is your idea of fun then you're a loser. Hashtag just sayin'.
For her song #GETITRIGHT she sat on a HUGE bed on stage. Honestly, I was kind of scared of what she would do on that bed. Throughout the song, her back up dancers started to crawl out of the bed to join her. First was her little person dancer who cuddled up with her. When the song was halfway through I swear there was like 10 people in that bed with her and they were rolling around being naughty. (I thought, why couldn't my bed be like that where Nick Carter would come crawling out of it :p)
For her song "Adore You" she had her version of "Kiss Cam." On the screen was an image of a ring and throughout the song the cameras would focus on people making out in the venue. They showed both straight and gay couples.
The show was very Miley though. She had a huge puppet on stage for one of her songs. 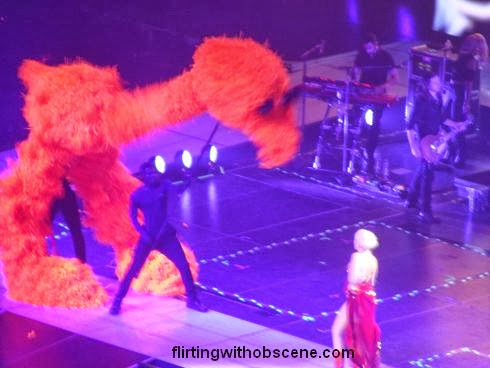 Her dancers were also dressed in costume. 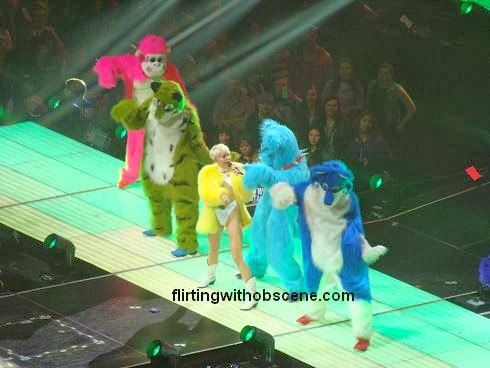 There was a huge wolf during "Can't Be Tamed" and she gyrated and humped its legs. 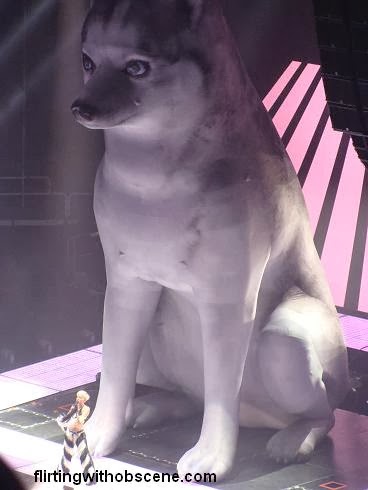 There was a part of the show where she moved from the main stage to a tiny near stage in front of my section. She did an acoustic set there which I enjoyed. She performed acoustic versions of Outkast's "Hey Ya" and Dolly Parton's "Jolene." During this part she wore a long t-shirt with her face on it. 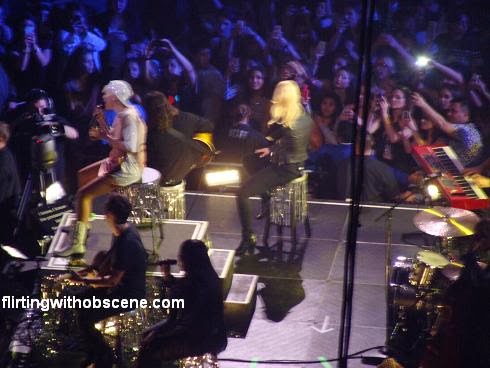 I remember there was a part where she wore chaps that was very reminiscent of Christina Aguilera during her Dirty phase. 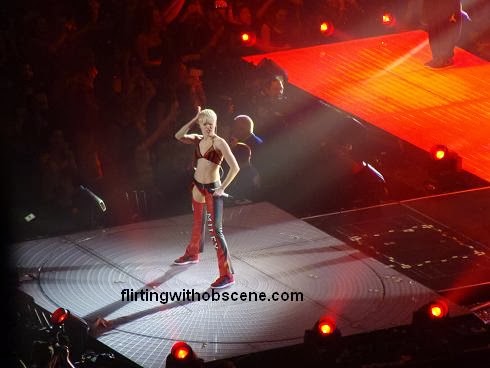 The show felt extra long because I didn't know most of the songs. I just wanted to hear "Wrecking Ball" and "We Can't Stop." 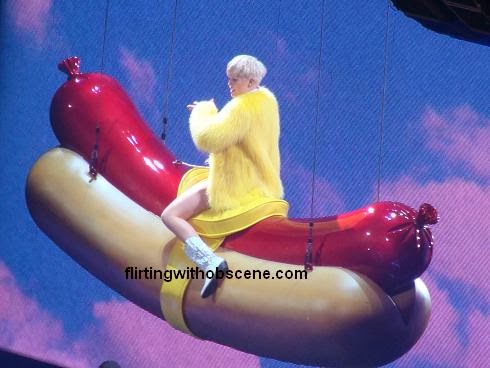 Near the end she got on a giant hot dog and rode it around the venue. I thought that was funny since earlier I ate a hot dog. I found out later the name of the song she rode the hot dog is called "Someone Else." I wish I had the chance to appreciate the performance more because after the show I listened to the song and I ended up falling in love with it.
Finally it was part I waited for. Miley came out wearing a silver glittery leotard and sang "Wrecking Ball." Then after that she sang "We Can't Stop."
It amused me after "We Can't Stop" people started leaving already. They obviously don't know the concept of encore lol They stopped leaving when Miley came back on stage for "Party In The USA." She wore a wig and patriotic looking leotard. Her back up dancers were dressed in patriotic costumes like Mt. Rushmore. 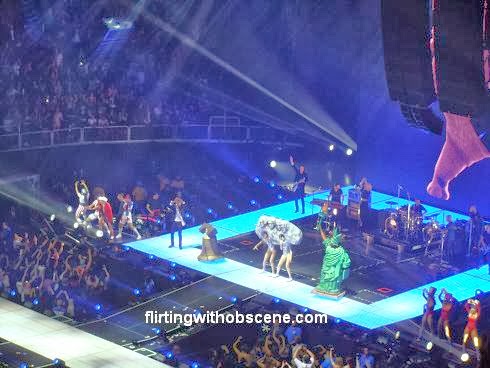 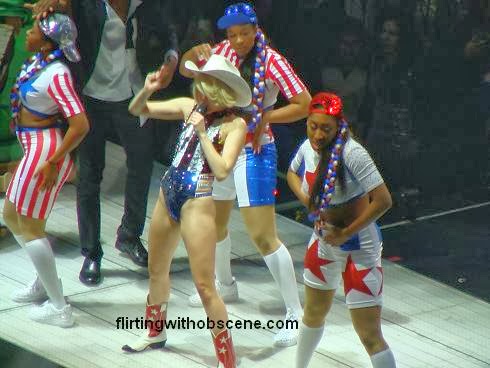 The show was a very interesting experience and it was nice to see a show other than Backstreet Boys. Actually, in a way her show made me miss Backstreet even more because they're very good at interacting with the crowd. Miley didn't really interact with the crowd much. I understand she's all about shock value right now but it's like then what when the novelty fades away.
I also felt she was trying so hard to be sexy but it came off more dorky and awkward. The girls who sat next to me were practically lol'ing through most of the show because they thought she was ridiculous. They actually left almost over halfway through the show.
Although my eyes may have felt violated at some parts I am very thankful to Live Nation for giving me the opportunity to see her show and expose me to her album. After the show I listened to her album Bangerz on Youtube to review what I heard live and it's not bad. The songs on her album that stand out to me are "Someone Else," "FU," and "Do My Thang." It's too bad she's letting shock value and thirst for attention drive the direction for her show. I think if she tried less hard the show could have been bettered produced.
Posted by Jocelyn - eliminatefullprice.com at 11:43 PM No comments: