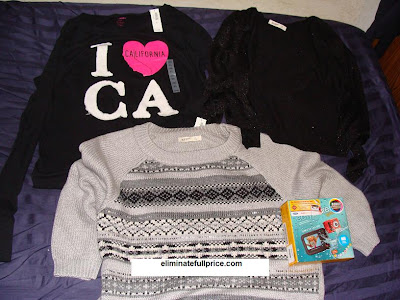 (My Black Friday find from Target)

Last year in 2010 I went to Old Navy hoping to get the free video game with purchase but I showed up too late and I wasn't able to get one. I told myself that if Old Navy had a decent free gift with purchase in 2011 that I would make the effort to wait in line earlier.

This year Old Navy was giving out Kodak digital camera's with a $40 or more purchase. The camera isn't anything fancy but I thought it would be a good camera to use as a back up to the one I already have. Plus what I like about it is its waterproof and since I'm going on the Backstreet Boys cruise, I figured I could use it on the beach in the Bahamas.

My mom doesn't like standing out in the cold so I went with my dad to a stand alone Old Navy in Fremont, Ca. We arrived around 9:30pm and there was already a line in front of the store! I was a bit nervous that I didn't have a chance at the camera anymore. I read online that there were only 30 cameras per store.

As the hours passed, more and more people began to arrive. The line got very long. At 11:30pm, 30 minutes before the store's opening, the manager came out to make a few announcements. He explained that wristbands would be handed out and whoever got a wristband was guaranteed a camera. Then he reminded everyone to be calm during their shopping experience.

The manager and a female employee then started to give out wristbands. I was so relieved when the female employee gave me a wristband. My dad got one too. I was wristband #29 and it looked like there were about 40 or 50 wristbands total.

I honestly had no plan on what exactly to buy. When I finally got into the store, I wandered over to the $5 graphic tees. I saw one that caught my eye. On the shirt it said "I <3 CA." Since I am a California girl, I had to get that.

After I got that shirt, I looked around to see what else I should get. That's when I spotted a chubby man just swipe up a bunch of womens scarves hanging on a fixture. I was thinking WTF? lol There were 2 women already there and once they saw him swipe the scarves closest to him, they swiped up whatever scarves they could before he could take them. That's when I realized that the scarves were $1 each and no wonder the guy wanted them. I sensed the guy was an eBay seller because there's no way that guy would use all those scarves himself... unless he had a lot of female relatives and friends but somehow I doubt it!

I even saw a lady so mad that he got all the scarves. She complained to an employee about it but I don't know if there was a resolution or not.

I tried to shop as fast as I could so that I could check out before the line got super long. However, I had a tough time finding clothes that I both liked and fit right. After trying out multiple sweaters, tops, and pants, I decided on 5 things. I bought a gray sweater, the "I <3 CA" shirt, a black open cardigan, a peace sign scarf and a purple sweater. I ended up returning the purple sweater later on since I changed my mind about it. I was able to get one $1 scarf (which I discovered later was for little girls) because a lady in line changed her mind about it and put it down.

I spent $44.59 and got the Kodak digital camera for free. I thought it was a pretty good deal.

After Old Navy, I went to Newpark Mall. I didn't buy anything there but I was able to get the free Disney snow globe JCPenney gives away every year. I went home after that and got some much needed rest.

When I woke up later in the afternoon, I inspected my Old Navy purchase and saw the security tag was still attached to the grey sweater! I had to go back and get it removed. Then as I mention earlier I changed my mind about the purple sweater so I had to return that. Once that was all taken care of, I went to Target with my parents.

I found a Missoni for Target top for $13.48 (not including tax). The top retailed for $44.99! I'll admit it's a bit snug in my tummy area but for the price I couldn't resist. Hopefully it'll inspire me to lose a few inches off my gut :p

So that was my Black Friday haul. What was your Black Friday like?
Posted by Jocelyn - eliminatefullprice.com at 4:32 AM No comments: