Last week's mail was amazing! I received a ton of fabulous prizes from different contests I entered.

My favorite freebies I received are the Nike Shoes from the Dr. Oz Show and the CHI curling iron from Allure magazine.

Here's a picture of everything I received: 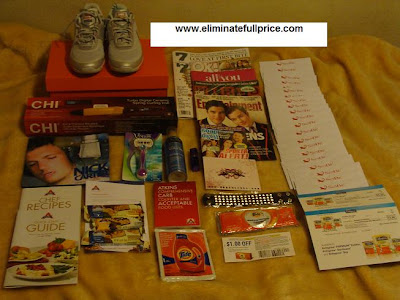 January 17th
-Nike shoes I won from being one of the first 2,011 people to enter Dr. Oz Show Nike Shoe giveaway. I selected the Nike Free XT Everyday Fit+ Women's Training Shoe in Pure Platinum. These shoes are worth $100.00!

January 19
-All You magazine
-Rimmel London Moisture Renew Lip Colour I won from being a runner up in Lucky magazine's Katy Perry sweepstakes. I was one of the 1st 50 people to enter. I was sent the same color lipstick that was used on Katy Perry's cover look for Lucky magazine.

January 21st
-Soap Opera Digest
-7 Sobe coupons from Sobe's Instant Win Game that is now over
-CHI curling iron I won from being one of the 1st 250 to enter Allure magazine's August 2010 giveaways. According to Allure magazine, the full price is $143.97! I cannot wait to use it on my hair.

January 22nd
-7x7 Magazine
-OK! Magazine
-Make Me Chic bracelet I won from being one of the 1st 10,000 to enter Seventeen magazine's giveaway

Also, if you haven't already, please publicly follow my blog by clicking the "Follow" button under the "Followers" section on the right hand side of the posts. Thanks!
Posted by Jocelyn - eliminatefullprice.com at 4:10 AM

OMG! How amazing. I'd given up on entering giveaways because they are time consuming and my last thing I won never came (mail issues). Now I'm kinda changin' my mind!

Happy belated MM! WOOOOOOOOOOOOOOW! You are soooo lucky...and speedy to be one of the 1st to enter sweepstakes and other types of contests. I am soooo impressed! You really ht the motherload in Sobe coupons - yum!