Mailbox Monday - 2 weeks worth of mail! My empty envelope was replaced!

This post will cover 2 weeks of mail. For those who didn't know, I used the plane tickets I won from My Coke Rewards to fly to Canada to see a Backstreet Boys concert in Winnipeg, Canada. I should have my review on my trip posted here soon.

I think my mail knew I was on vacation because I didn't receive much these past 2 weeks.

In my Mailbox Monday post from last week I wrote about an empty envelope I received that was supposed to have a bottle of Sally Hansen's Nail Nutrition Green Tea + Olive Growth inside from Allure magazine's June 3rd, 2010 giveaway.

I e-mailed both Coty (the company responsible for mailing out the prize) and Allure magazine and told them about what happened. To my surprise, they quickly responded to my inquiry. They sent me a replacement AND coupons to use for more Sally Hansen products. I thought that was really nice of them.

Here's what I received from August 9th to August 14th: 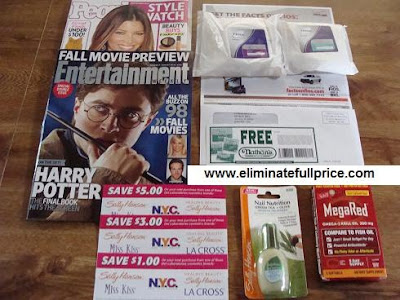 Here's what I received from August 16th to August 21st: 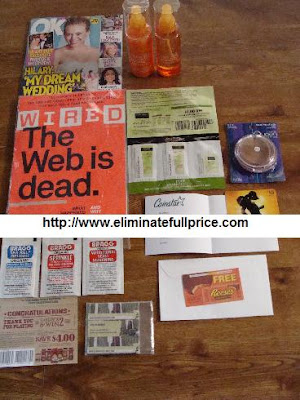 August 17th
-Covergirl Bronzer from being one of the 1st 20,000 people to sign up on Covergirl's Facebook

August 19th
-Free Reese's Coupon from a contest that is now over.
-Wired Magazine

August 21st
-$10 iTunes Gift Card I won on August 17th from Trivia Tuesday on Coinstar's Twitter (@coinstar). I was really impressed with how fast my prize arrived.

Also, if you haven't already, please publicly follow my blog by clicking the "Follow" button under the "Followers" section on the right hand side of the posts. Thanks!
Posted by Jocelyn - eliminatefullprice.com at 12:27 PM

Great few weeks! I love the full size products! And good mags too.

Reeses are the best! I am going to have to check out Allure. :)