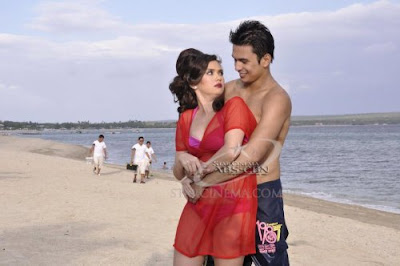 (A production still from the Filipino film "Here Comes The Bride" with the bride Stefanie played by Angelica Panganiban and the groom Harold played by Tom Rodriguez)
My mom really wanted to see a Filipino film entitled "Here Comes The Bride" which was being exclusively shown at my local movie theatre for one week only. I had some movie tickets I won from Coke's Twist Txt Get Instant Win Game so I took my mom and dad to see it.

Although I don't fully understand the Tagalog language I got the general idea of what the movie was about. I kind of wished there were English subtitles so I could have understood more of the jokes. There were some points that the audience laughed but I didn't since I had no idea what was funny.

The film has similar themes to the films 17 Again and Freaky Friday. It's Stefanie's wedding day and on the way to the ceremony there's an eclipse that causes 5 people involved in the wedding to switch bodies with each other. After they switch, lots of comedy ensues as they each adjust to their new body.

It was a very light hearted story and the 5 actors who switched places with other did a great job imitating the person they switched with. What was heavily missing from the story was strong a moral reason why the switch happened and a lesson for the audience to learn. It seemed the only valid reason for the 5 characters to switch bodies was to make the audience laugh.

I give the film a C+.
Posted by Jocelyn - eliminatefullprice.com at 12:21 PM