I've been receiving a lot of good mail for the past few weeks. Here are some of my favorite freebies I've recently received.

I'm sure most of you are familiar with the clothing and accessory line Bebe. They have created a new division of stores called PH8 which is pronounced fate. On PH8's twitter (@PH8_Stores) they had a contest where whoever took a picture inside a PH8 store wearing PH8 clothing could get a chance to win some prizes. Since there is a PH8 store at a mall close to me I decided it wouldn't hurt to try. I took some pictures and submitted it to PH8's twitter. I ended up winning the contest and I won a bunch of cute PH8 jewelry. The prizes included three necklaces and three bracelet cuffs. 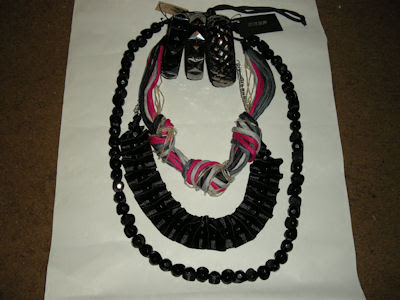 Thanks to the Purse Forum I am familiar with most of the greatest handbag designers. Botkier is a brand that is very popular among celebrities like High School Musical star Vanessa Hudgens. Back in 2008, Botkier even had a line at Target and I was able to get a rose satchel from there. I don't own a high end leather Botkier yet but hopefully in the future I can buy one. 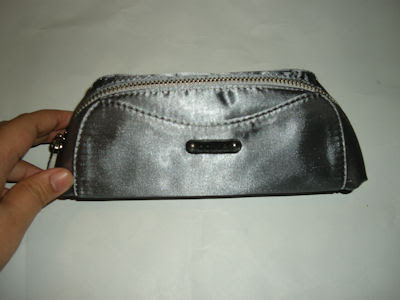 Since I'm on the topic of cosmetic bags I received another one on Saturday January 23rd via Fedex. In November 2009, Allure magazine was giving away 500 Alicia Silverstone Ecotools cosmetic bags to the first 500 people to sign up at their website. I remember in 6th and 7th grade I absolutely loved Alicia Silverstone. She was one of my favorite actresses. Her role as Cher in Clueless is timeless and classic.

I was pleasantly surprised when I got to see the cosmetic bag in person. In the pictures I've seen of it online, it appears to be flat but it's not. It can hold a lot of essentials inside. Alicia is very caring about the environment so the cosmetic bag is made of natural hemp material and the lining is made of recycled plastic. I also love the flower design on it. 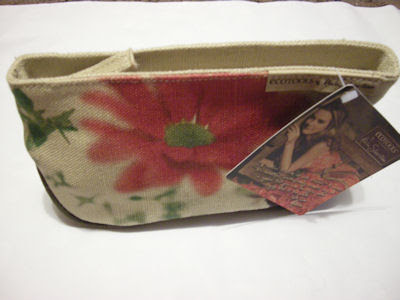 I of course need some cosmetics to put into these cosmetic bags. Through DermStore's Twitter (@DermStore) I found out they were giving away Jane Iredale Chocoholicks lip glosses on their blog (http://blog.dermstore.com/). These lip glosses are worth $44.00 on the Jane Iredale website and they're currently sold out! All I had to do was leave a comment on the blog telling them what's my favorite dessert which are red velvet cupcakes from Sprinkles!

The lip glosses come in four delicious flavors: truffle, caramel, strawberry cream, and chocolate orange. Upon opening the box my nostrils are filled with their delightful smell. 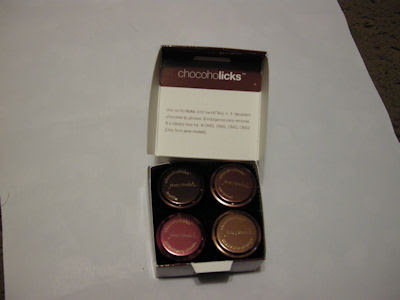 Now that I have some jewelry and makeup I need some place to go to show off what I got. Around October 2009, I put a ton of entries into My Coke Rewards' Delta Airlines Escape for Two Sweepstakes. To be exact I put 1,575 entries into this sweepstakes. There were 9 prizes which consisted of 2 plane tickets given to each winner. On November 23rd, My Coke Rewards held a drawing and I happened to be one of the 9 winners! I can fly to any of the 48 states, Canada, Mexico, or the Caribbean. If Backstreet Boys tour in any of those locations before the plane tickets expire I plan to use the tickets to see them in concert. I received the plane ticket vouchers on Thursday January 21st via Fedex. I hope Backstreet Boys announce their North American dates soon! 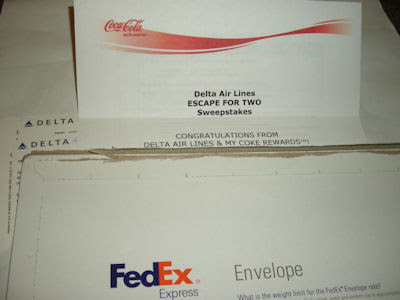 Speaking of Backstreet Boys I nearly had a heart attack when I received a tweet from their official twitter (@backstreetboys) that the first 100 people to enter a code on their fanclub website would receive a free 1 year membership to their fan club.

I decided to start from the beginning so I go back to the original tweet that had the link on where to go. I then scrolled down and found the place to enter the code. Silly me, if I had only scrolled down the first time around I could have saved myself a few minutes of panic. I entered the code and thankfully made it in time to get a free 1 year membership! Getting a free membership to the fan club means so much to me because it's so expensive! My membership had expired in October 2009 but I didn't bother to renew it. One year of membership approximately costs $45.00 so I'm glad I could save money. On Twitter I found out BuddyTV (@BuddyTV) was giving away Volume 3 of The Secret Life of the American Teenager to 5 winners. That show happens to be one of my favorites so I had to enter. I found out on January 20th that I won and on January 25th I received the DVD set in the mail. 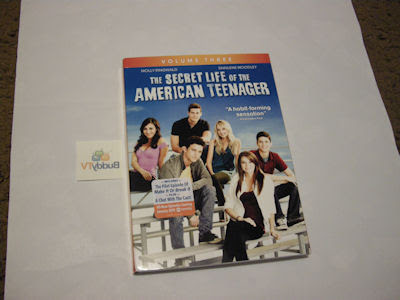 Let's just imagine that I'm done watching The Secret Life of the American Teenager DVD's and I need something to do. A few months ago Harlequin was having a Instant Win Sweepstakes to promote their latest book aimed towards teenagers entitled Intertwined. I won a copy of Intertwined and it looks like an interesting read. I know I'm not a teenager anymore but I'm still open to reading teen oriented books. Whew! That was quite a bunch of mail to go through! I love it though and I hope to receive much more goodies!
Posted by Jocelyn - eliminatefullprice.com at 11:39 PM